A new Phoenixing Hotline, introduced by the Federal Government this week, is an important step in protecting the incomes of NECA members.

Phoenixing is a term for companies that are liquidated in order to avoid paying their bills – to for example sub-contractors – but which then reinvent themselves and start operating as another company. 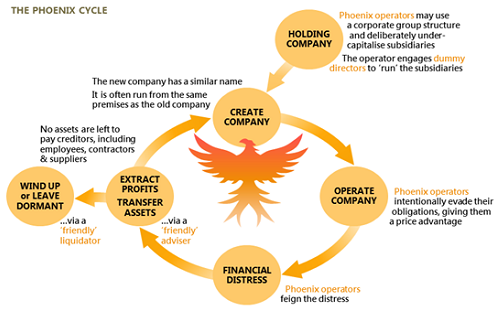 A report prepared by PwC for the ATO, Fair Work Ombudsman and ASIC estimated the practice cost the Australian economy between $2.9 and $5.1 billion in 2016-2017. The bulk of the cost (up to $3 billion) was born by businesses, such as sub-contractors, with employees missing out on wages and superannuation payments of up to $300 million.

“We are aware of contractors who are $200,000 out of pocket due to phoenix activity. That’s compounded by the significant stress and strain it causes, particularly on the smaller, family businesses who struggle to cover such a loss,” said Suresh Manickam, NECA National CEO.

“Unfortunately, phoenixing has been particularly prevalent in the construction industry, in which NECA’s members operate. It is a totally unacceptable and inequitable practice,” he said.

The Government has, this week, announced steps to address the problem including the hotline, a director identification number scheme, new phoenix offences and new penalties for misuse of the unpaid wage safety net.

“NECA welcomes any measures that will crack down and introduce more penalties on companies who undertake phonenixing. We support all measures that better protect, and create greater security for electrical contractors, their employees and the apprentices who work for them – all of whom are particularly vulnerable to this unconscionable practice,” said Manickam.