Following this, the apprentice removed the neutrals from the neutral bar. He touched the B2 neutral conductor with his right hand while his left forearm was leaning / touching the earth (switch board) frame - he then received an electric shock.

The apprentice immediately tested and found 266V between the B2 neutral conductor and neutral bar.

Root Cause
Both the tradesman and the apprentice failed to ensure that the last step of the EGT IITT process was physically completed. (Note: The IITT checklist was completed - admin only).

This procedure clearly states to "Re-test separated conductors for possible back feed" as indicated in Figure 1. 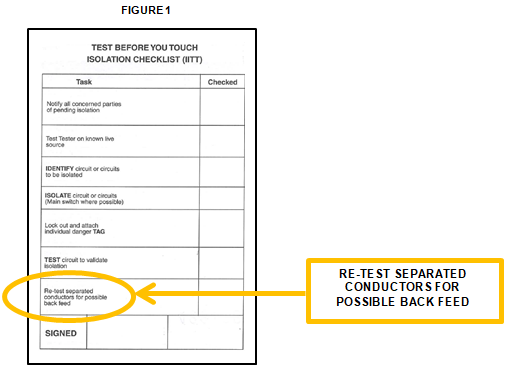 Feedback
For further information regarding this Safety Alert, please contact EGT on (08) 6241 6100.